I’ve owned the JVC TH-S5 home theatre system for many years.  It could be as much as 8 or 9 years.  In all that time it’s been a reliable machine, although to be fair it’s also had quite an easy life; I don’t watch much TV (what self-respecting Engineer and tinkerer has time for that?) and even when I do I rarely give the system a run for its money.

About 6 months ago the system developed a problem.  When started from cold the base unit (i.e. the DVD player and system controller) would fail to power on.  I also noticed that if I listened very carefully I could hear a [tick-tick-tick-tick] sound coming from the unit.  I recognised this straight away – it’s the switch mode PSU trying (and failing) to start.  I was about to take the unit away to my tinkering cave for some diagnosis but I further noticed that the [tick-tick-tick] sound would gather pace, getting faster and faster, until eventually it was possible to bring the unit into life after a power-cycle.
The unit would work perfectly from that point onwards, provided that it was left connected to the mains.

Of course, I always knew this was a temporary solution.  This problem was not going to go away.  It was going to deteriorate for sure, and eventually I would be faced with a completely dead system.  And sure enough, 6 months down the line, that’s what I’m faced with now!

First thing’s first, I needed to get the cover off for an inspection.  With an old system like this I already had some preconceptions about what I thought I’d find.  Bad electrolytic capacitors were absolute top of my list for this kind of symptom.  Dry joints were a close second.

As can be seen here, the power supply is self-contained on the right hand side of the unit.  This is where the focus of the attention should be.  An initial inspection yielded a disappointing result.  With bad electrolytics at the height of my suspicion, I was hoping to spot one or two displaying the classic physical symptoms of bulging or weeping.  This would be a sure-sign of trouble, and usually an easy fix.  The capacitors all looked physically healthy, though.  Time to whip the board out of there for a closer look.

Looking more closely at the PSU board itself, there were no obvious (physical) causes for concern.  I didn’t spot any dry joints on the underneath of the board either.  The focus of this investigation should be the primary side of the PSU because the symptom is that the PSU completely fails to start.  The primary side is marked clearly on the board and consists of everything to the left of the yellow-banded transformer.  The transformer bridges the electrical gap between primary and secondary sides of the PSU.  It’s an electrical gap because there is actually no direct electrical connection between primary and secondary sides.  The two sides are said to be electrically ‘isolated’.  This is important because we have dangerous high voltage mains A.C. on one side of the transformer, and then low voltage rectified D.C. on the other side of the transformer.  Never the twain shall meet!!!

Anyway, back to the fault diagnosis.  Since I am concentrating for now on the primary side of the PSU, and I have electrolytic capacitors as #1 on my suspicion list, it makes sense to have a look for some.  There’s only two of these on the primary side of the board; there’s the big fat one, which is a reservoir capacitor (and certainly not the cause of my trouble) and then there’s a small skinny one next to the chopper transistor heatsink.  The chopper transistor drives the transformer.  It switches high voltage, high frequency A.C. and dissipates significant power.  If you look at the surrounding board, it’s darkened brown from the heat that is generated by these components.  This is where all the electrical stress is to be found on this circuit.

Since the skinny electrolytic capacitor is mounted close to the chopper transistor heatsink, it will have been subject to the heat that has been pumped out of the high energy part of the circuitry over the last 8 years or so.  Electrolytic capacitors do not respond well to heat.  Often they bulge and weep, effectively holding their hands up to say “I’m faulty!!!”.  Other times they violently explode.  And other times still, they just die quietly without any fuss or obvious signs of defect.  They’re a bit like vampires in this regard; many different dying behaviours.
So the fact that it’s not showing signs of death doesn’t rule it out of my suspicion.  I’m going to whip that little guy out of there and subject it to some electrical tests which will reveal once and or all whether it’s healthy or not.

One thing you can measure on an electrolytic capacitor, which generally gives a good indication of its health, is its ‘ESR’.  This stands for “equivalent series resistance”.  An ideal capacitor would have properties of capacitance only, with no ESR and no inductance.  But it’s impossible to manufacture the ideal capacitor.  In practice all capacitors have some small amount of ESR and inductance.  Electrolytic capacitors have relatively high ESR compared to some other types of capacitor, but when it is healthy the ESR is still pretty low.  When it is unhealthy, however, the ESR increases significantly.  And then we end up with a very poorly performing capacitor indeed, and that’s when they begin to prevent SMPS power supplies from starting.
The test I am going to perform here is going to tell me approximately what this capacitor’s ESR measurement is.  I don’t actually own an ESR instrument, so I’m going to have to measure it in another way, using SCIENCE. 🙂

Here’s the circuit which shows how I will complete the measurement.  Click on it for a larger version.

So what I’ve got here is as follows:

A signal generator which I will use to apply a measurement stimuli to the capacitor under test.  I will be applying a 100KHz square wave @1V amplitude.  At 100KHz most electrolytic capacitors appear as close to a short circuit, provided that their ESR is low.  This particular device has a capacitance of 39μF.  If you do the math, the impedance that it should prevent to a 100KHz signal is:

First let me do some measurements without the bad capacitor fitted, so that I can show you what to expect to see in a good scenario

Measurment with no capacitor fitted.

With no capacitor fitted at all, the resistance of the capacitor (R2 in the potential divider equation) is effectively infinite, so the voltage dropped across it will be the open-circuit voltage.  Basically the off-load output of the signal generator.  We should therefore expect to see the full 1V, 100KHz output as shown below:

Here’s what happens when you insert a good electrolytic capacitor into the circuit.  It presents close to 0Ω resistance at 100KHz, so the fraction of voltage that appears at the oscilloscope is also close to zero:

If you look closely here you can just about see a square wave appearing on the flat-line.  If I zoomed into this I could calculate the capacitor’s ESR, which would be small.  But it does have some ESR.
There are also some rather large spikes.  This is because the step change from 0V to 1V is relatively high speed, and this signal is reflecting back down my cabling as a result.  Suffice to say I don’t need to concern myself with the spikes – they are interesting, but they are not related at all to this measurement.

Measurement with capacitor removed from system

Here is what happens if I put the capacitor I removed from the system in the circuit.  You can see that a very large square wave is being developed across it! Almost 500mV, in fact.  I could do the math here, but I really don’t need to.  If you see a square wave of this sort of amplitude being developed at 100KHz, then it’s clear that the capacitor has excessive ESR and is no longer performing very well.  As a quick mental approximation, we’re seeing a fraction of the 1V square wave being developed which is almost equal to 0.5.  So this means that the impedance of the capacitor must be close to 50Ω, since a potential divider with the same value resistance for R1 and R2 would give us an output of 0.5Vs (or 500mV in this case).

With this in mind it’s definitely time to replace the capacitor.  I didn’t have any 39μF capacitors in my home stash, but I had a 47μF so I decided to try that.  It did in fact work fine, and my system is now up and running again.

If you suffer a power supply problem with an aged piece of electronics, electrolytic capacitors are a good place to start.  They can fail on the primary or the secondary side, but will show different fault symptoms in the product depending on their function in the circuit.  Sometimes it is plainly obvious which ones are faulty; they’ve either exploded or they’re bulging at the top or leaking fluid.  Other times, as I’ve just shown here, they look okay physically but are hiding a nasty decline in capacitance performance internally.  In that case you can use this method to gauge whether they require replacement or not.  You can actually do this test in circuit, but it’s not recommended.  It’s always better to remove them first if possible. 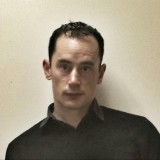